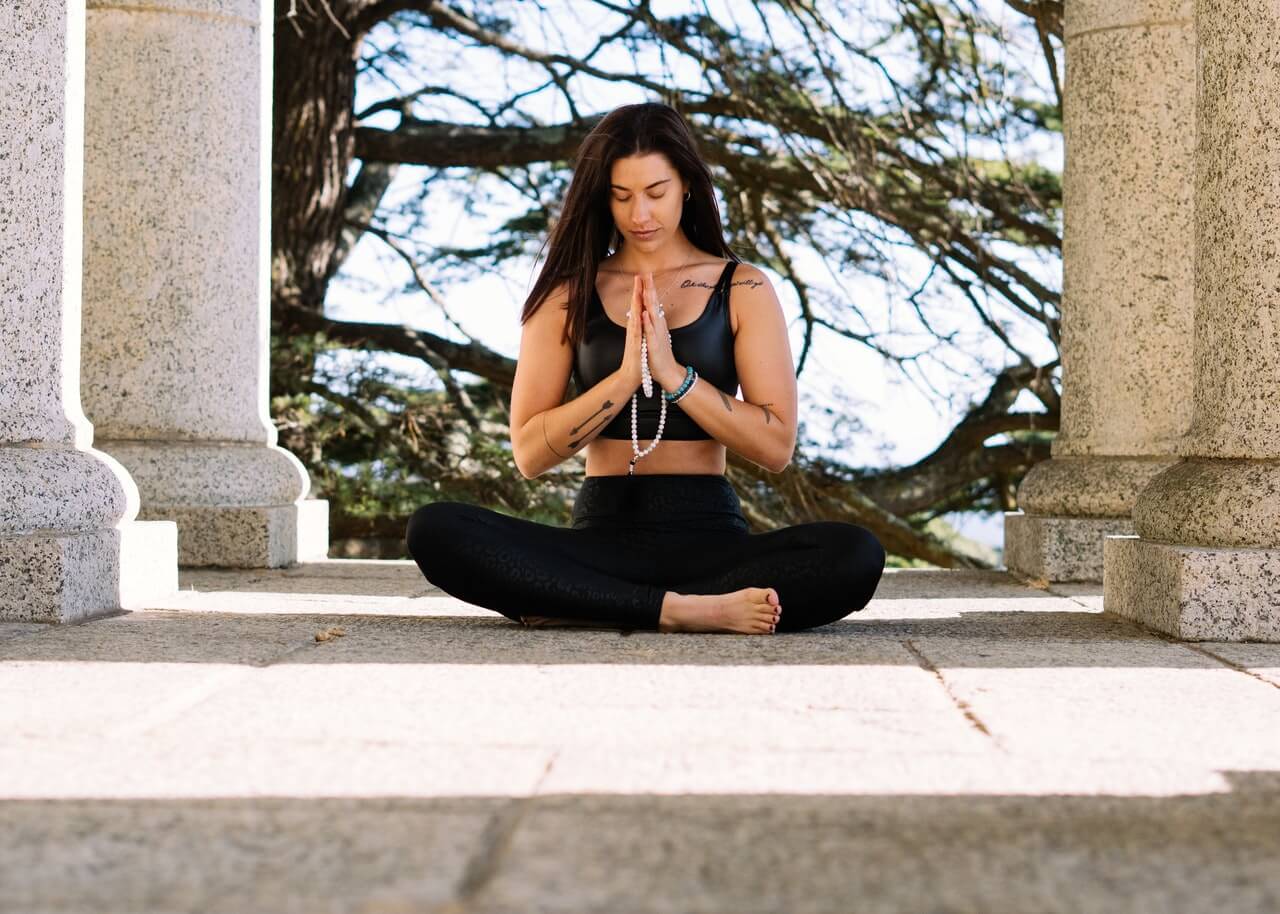 Take a journey through the ages as we explore the rich history, origins and culture of yoga.

Discovering some cool facts and statistics, will peak further curiosity in students and critics alike.

What are you waiting for? Read to uncover how old is yoga:

Any guesses as to how old yoga is exactly?

Before the modernized version of yoga that we have come to know, studies show the origins of pre-classical yoga to date back as far as the ancient Indus-Sarasvati civilization.  These primitive people called Northern India their home.

Also, known as the Harappan civilization, these primitive people thrived in the years 3300 BC to 1800 BC. They transformed themselves into the most developed and largest society in the Bronze Age. The Indus Valley homed the Aryans, speakers of the Sanskrit language.

During an archeological find dated 1921, a team of excavators found a seal displaying a male figure seated in the lotus position. He was surrounded by animals. The evidence pointed to Lord Pashupati. He was known as lord of animals, which is a form of shiva that is worshipped by residents in Nepal and India, even today. Shaivism is a tradition practiced in modern Hinduism.

The Rigveda is compilation of Vedic Sanskrit hymns. Circa, the 4th millenium BC, a set of phallic symbols resembling the Shiva Lingam, known as the Lord of yoga was found. Vedas are a set of songs, mantras used by Vedic priests. These priests were named the Brahmans and they documented their yoga practises. The first set of practices contained 200 scriptures in total.

500 B.C.E saw the formation of the Bhagavad Gita, the most famous yoga scripture known today to man. It consisted of the ideation of ritual sacrifice of one’s ego through self study. This was known as the foundation of yoga, and called action and wisdom. We know this as karma yoga and jnana yoga.

The creator believed to be behind the classical yoga approach was named Patanjali. No one even knows exactly when this pioneer lived, but he is known to have had a considerable contribution to the Ayurveda (system of medicine by ancient Indians) and the Sanskit grammar itself.

There are some really interesting stories about how exactly he hatched on earth. One such a tale suggests that he fell from the heavens, in the form of a juvenile serpent and was birthed by a yogini called Gonika, who was believed to be extremely powerful. Others suggested that he has been reincarnated from the serpent king Remainder, whose coils or segments in the body are believed to support the god Vishnu.

The Bhagavad Gita, is a highly recommended read for all yogi students to undertake. The book, also referred to as the Celestial Song, comprises a collection of over 700 verses that educates the yoga student about the teachings of the different yoga paths as recorded by the Upanishads in terms of the foundation and age thereof.

The Bhagavad Gita on Yoga

This ancient scripture speaks of 4 types of classical yoga:

Bhakti yoga. The path of love. This yoga type has an emotional approach. Baktha means a devotee of god. The idea thereof is to reach god by an act of love, this is referred to as the devotion.

Love forms the basis of everything, and is done in the most natural of ways. Love is what is needed for a life of deeper spiritual fulfillment.

Jnana yoga. The path of knowledge. This refers to the knowledge of the Brahmans. These practitioners believe that we cannot achieve a higher relationship with god, due to the veil of maya. Jnana yoga focuses on unveiling the barrier so to speak. The veil is said to be torn by two specific practices during this yoga type.

The second part is affirmation of self. This means what you think, is how you will become. The foundation and age of Jnana yoga teaches us to think in the manner of how we wish to become. Ergo, if you constantly think negative, everything in your life will have a negative effect in that regard.

Karma yoga. The path of work. Karma is seen as both the work and the result we achieve, of what we focus on. It is said that whatever we do in the universe, whether it be bad or good, is what will come back to us. If you inflict harm and create bad vibes, it will have a ricochet effect. Ripples of bad luck and vibes will find their way back to you.

The mind cannot lead if it’s clouded by other cumbersome factors. Regular rounds of meditation is needed to free the mind from pollution and will teach the yogi and yogini to live their lives from a contemplative perspective. Once the mind has been mastered, the path will become clearer and less turbulent.

Being a famous celebrity, and being recognizable all over the world demands that you not only take care of your body from a vanity perspective, but also investing in the foundations of yoga to create and maintain mindful wellness of the mental kind.

Their are a number of Hollywood royalty that swears by the practice of yoga, some of these include:

Matthew McConaughey. This celebrity is looking all right, all right from frockling in the sand on the beach. He is an avid practitioner of yoga to keep fit.

Jennifer Aniston. At 51, she is looking better than ever. She swears that the regular practice of yoga keeps her looking great and makes her feel fantastic.

Kate Hudson. The golden haired daughter of Goldie Hawn and Bill Hudson, loved yoga so much that she created her own brand of fitness clothing called Fabletics.

Giselle Bundchen. Brazillian model, and mother of two can be seen all around the world on her travels, deeply entrenched in the foundation of yoga practices. Whether this be practising her headstands on the beach or attending a class at a local yogi studio.

Adam Levine. This Maroon 5 frontman, insists on having a room dedicated backstage. He credits his toned physique to the regular practice of yoga. We must say, the results speak for themselves.

There are so many unique intricacies that surrounds the yoga practice, some of these will completely blow your mind:

Apart from the trusty yoga mat that accompanies you to class, or transports you to a deeper connection in the comfort of your home, yoga also has other exercise partners in the form of props.

The beauty of these other resources is that it can assist yoga students to achieve poses that normally might be impossible to master otherwise.

Some asanas can be helped along by making use of some props. A few of the poses that can be aided are:

The props that can enhance the workout are:

Yoga blankets. Blankets are multi-purpose in that they can be used to practice on the beach in summer, or to add a bit of warmth during the colder months of the year. They are firm in nature and generous in size. For a tight back or hips, a yoga blanket can be added for additional comfort in practicing a few openings.

Yoga blocks. Versatile in nature, and has a multitude of creative uses. The purpose of the yoga block is to assist you in supporting your posture when practising the poses. Depending on the pose, it can either bring the floor closer to you, or higher for some of the other asanas.

Yoga strap. Yoga straps can be used to deepen your postures and enhance your overall practice. Regular use is also known to increase the flexibility of students. Most yoga straps are easily adjustable and made from cotton.

Yoga wheel. Many yogis have purchased this product solely on the premise of being able to perform what is called a spinal massage. This product is a firm favourite in the yoga world. It is however important to invest in a wheel that has good cushioning or padding.

Yoga bolsters. Otherwise known as yoga pillows. There are some great videos online on how to create this yourself. The yoga bolster can be described as the preggy roll of Yoga. It has proved itself as a sturdy partner for restorative yoga poses.

Eye pillows. Elevate your yoga asanas that are relaxing in nature by adding an aromatic yoga eye pillow into the mix. Using herbs with calming properties such as lavender, will amplify your experience.

Foam rollers. Another beautiful addition that you are able to add to your yoga routine is the amazing foam roller. They can be used as structures that provide added support, or for a massage post workout session.

Yoga and Your Intimate Relationship

If your partner is willing and able to engage in yoga practice with you, this will greatly heighten some experiences for you, and at the same time improve some other areas within your relationship:

Mindfulness. One of the teachings of yoga dictates that once a sense of increased mindfulness is reached, it has the makes for a happier relationship. You will not only think of yourself and your own needs, you will also pay closer attention to the needs of your partner.

Trust and Communication. During the yoga session you will both physically and mentally be leaning on your partner to achieve a mutualistic state of symbiosis. Touching being one of the love languages might instill a deeper connection and bond with your partner. Touching also acts as a measure of conveying trust and communicating your love for one another.

A decrease in anxiety and stress levels. It is sometimes very hard to support your partner when they experience anxiety coupled with stress. The mere touch of your partner’s hand can act as a neural response to stress, and to let your partner know that they are not alone.

Don’t all these facts make you want to dive into your favourite type of yoga, and use some of the props? Dhanyavaadaha!

Quote of the day:

“Yoga is the journey of the self, through the self, to the self” – The Bhagavad Gita

Thank You for reading article about

Thank You for reading article about

Thank You for reading article about how old is yoga 🙂