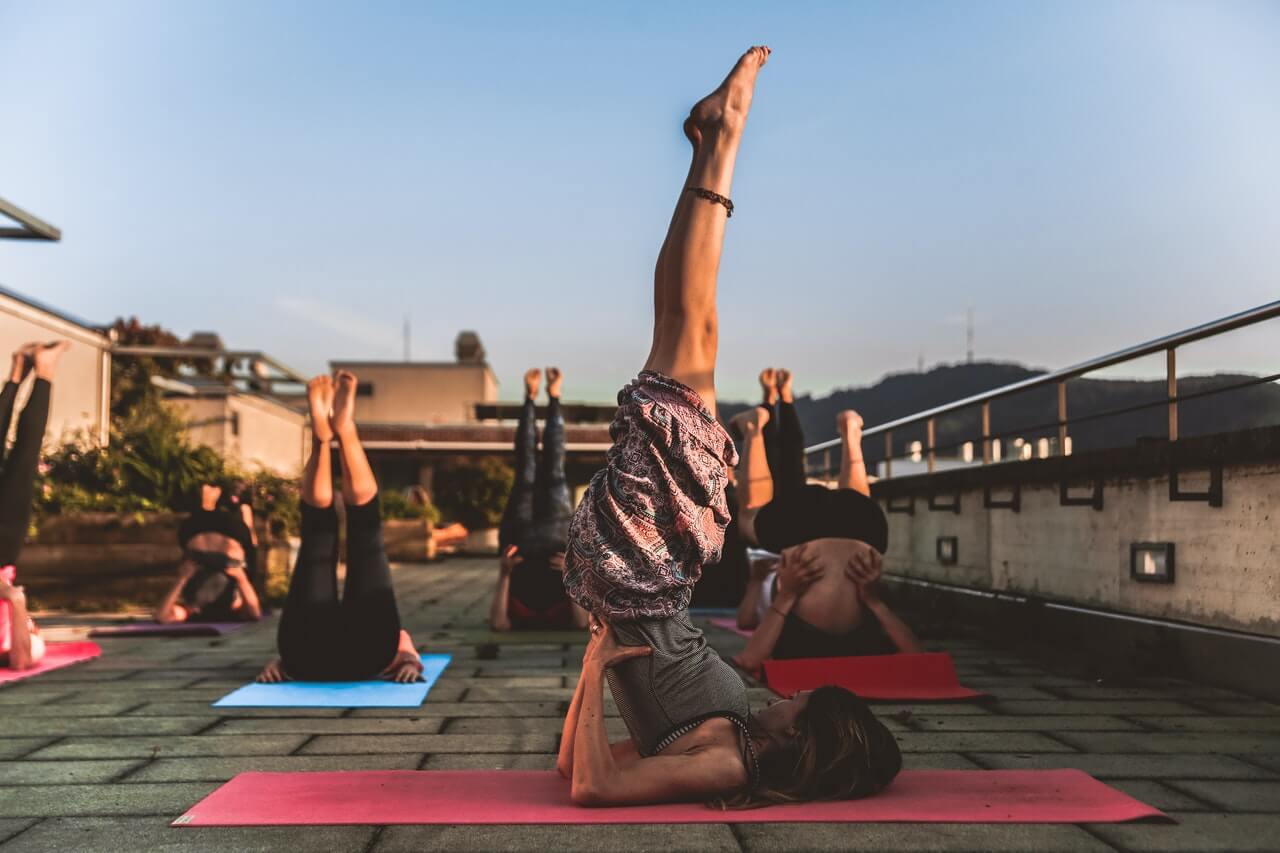 When you hear about hot yoga, you may well have questions like: am I going to pass out from the temperature? Is it  really  good for me? Does it really burn more calories compared to a hatha or ashtanga yoga practice, How Many Calories Does Hot Yoga Burn? Scroll down and let’s know.

Classes designed to get you super hot and sweaty are actually a fairly modern invention, founded in the 1970s.

The idea of  putting you  in a heated room in which temperatures range from 32 to 40  degrees Celsius began with Bikram Choudhury, who, thanks to allegations of sexual harassment and rape accompanied by an arrest warrant in the United States, now he is in disgrace and living in Mexico.

Let’s delve into what you need to know.

What Is The Difference Between Yoga And Hot Yoga? And How Many Calories Does Hot Yoga Burn

The difference, as we can deduce, is specifically that yoga is generally performed at room temperature, while temperatures in hot yoga classes are almost doubled.

While most teach a mix of positions and sequences, Bikram classes comprise the same 26 established positions that are generally performed twice.

What Is The Point Of Hot Yoga?

Practitioners preach the benefits more than many yoga schools, thanks to the measurable and visible results.

“It is not only safe, it is curative.”

Hot yoga also offers us mental benefits; With this practice, not only do you get the usual exercise-related endorphin spike, but the intensity of the workout means you need to focus on your breath and it can be a surprisingly conscious activity.

How Hot Is It?

Temperatures within this practice can reach between 37 and 40 degrees Celsius, depending on the study, and humidity.

In fact, the temperature in these practices is approximately the same as that reached in a good bath, however, we do not expect you to start doing an hour of yoga in a bath, so the result of this is rather bathing but in sweat.

What To Bring To Practice It?

As with any other class, there is no one correct answer. But, due to the inevitable excessive sweating, even for those who exercise in very light clothing, so to reduce it as much as possible we recommend using fresh clothing when you go to a hot yoga studio.

You will certainly sweat through anyway, which will make you feel cold and unpleasant. Because it is so important that you wear the clothes with which you feel most comfortable.

What is sure is that you have to prepare for the heat so the more bare skin you have to cool off it will be much better and do not forget to bring something to change after finishing your class, whether you plan to take a bath or not, well leave a hot yoga class, wearing wet clothing and going out in winter weather will surely cause a cold.

Should You Have A Hot Yoga Towel?

It is not indispensable at all, but it is certainly advisable to avoid slipping, drying the sweat and avoiding having to touch the same carpet that someone else has worked on.

How Many Calories Does Hot Yoga Burn ?

A lot of advertising related to hot yoga focuses on the enormous potential of weight loss, and to some extent, this  may  be justified.

A slow 90-minute class is said to burn 333 calories, but with faster classes you could burn up to 930 calories.

However, you have to know that these statistics are controversial because the Bikram College Yoga studies found that only 500 calories are burned.

So what if you can lose weight with hot yoga? Yes just like with any other exercise.

What Are The Disadvantages Of Hot Yoga?

Some yoga teachers point out that it was never intended to cause profuse sweating or an elevated heart rate. Even in India, it is practiced during the least hot hours of the day; in the morning, before the sun rises, or in the afternoon, when the sun goes down.

It also warns about the dangers of practicing in the heat. As muscles are artificially heated, it is said to make injuries that are usually caused by overstraining more likely.

Also, since classes commonly involve rapid movements in large groups and dark rooms, the teacher cannot correct mistakes that can lead to problems; either immediately or over time.

Although safe for most people, due to extreme heat, it can cause exhaustion or dehydration, this according to the American Council on Exercise (ACE) which shows that practitioners’ body temperatures reach near-dangerous levels.

If you want to attend one of these classes just make sure you drink enough water before, during and after the class, and take a break if you start to feel bad.

In addition, it is important that you take into account that if you suffer from any heart or cardiovascular disease you should not practice it. Nor if you are pregnant or are over 60 or under 16.

In fact, ideally, you should visit your doctor before beginning to attend.

Is Hot Yoga Better Than Other Kinds Of Yoga?

The long answer explains that it depends on what you want to get out of your practice. If burning calories is your priority, heat is more effective, however yoga in unheated rooms has more longevity simply because it is less intense and gets the same physical and possibly more conscious benefits.

How Often Should You Do Hot Yoga? How Many Calories Does Hot Yoga Burn

At this point, the recommendations vary again. Bikram advised once or twice a day for 100 days in order to really see improvement, but who has the time, money, and energy for that?

In general, it is accepted that you will be able to notice the benefits if you attend once a week, but of course it would be more remarkable if you enter three or four classes

We are talking about hot yoga or Bikram yoga, a favorite of celebrities such as Jessica Alba, Eva Longoria or the very Lady Gaga , with which you will get to burn more calories than in a running session (or so they say). How many calories burned in yoga

But what exactly is this type of yoga? The experts at the Californian Hot Yoga center in Madrid explain the different modalities of this method that leaves no one indifferent and is capable of arousing both hatred and passion. Do you dare with ‘hot’ yoga?

It is born in India in the 70s by its creator, Bikram Choudhury. They say that President Nixon himself came to him because of the thrombosis he suffered in one leg and could not solve. Since then, its success has spread to the entire world very quickly thanks to Hollywood stars like Shirley Maclain.

To this day, there are many known faces that declare themselves faithful followers of this discipline, such as Jessica Alba, whom we usually see on their Instagram profile sharing their classes.

As practiced? It is a sequence of 26 postures and two breathing exercises that are carried out for an hour and a half in a static way.

What does it consist of? This variant of Hot yoga differs because the sequence of postures is performed with a certain dynamism; which increases cardiovascular and strength work and will make caloric expenditure double.

Benefits. Define the muscles as if we were doing weight work; since we use the weight of our own body.

Hatha yoga is the best-known practice in the western world, and also the oldest that exists (5,000 years ago).

What is it? Through a set of postures, localized blockages in the body and mind are removed, in order to release and let the energy flow. It helps the postural alignment in a therapeutic way, reinforcing it with the room temperature.

The roots and history of this type of yoga can be found in Chinese medicine and Daoism. It is a yoga that focuses on training the joints.

As practiced? In a Yin Yoga class the postures focus on strengthening and protecting the joints. For this, the postures are always performed on the floor, for long periods and without movement. Joints are not like muscles and therefore exercise differently.

Amanda Dawn Blackley is a teacher of yoga and mindfulness, a way of life that includes the practice of meditation. Amanda is British but her experience comes from training in places as diverse as Helsinki, Amsterdam, California or London.

In a chat with Diario Las Américas, he clarifies that Bikram should not be confused with hot yoga. “My first training was hot yoga in Thailand.

I have not practiced the Bikram style many times, a fixed sequence where each posture is repeated twice, but I spent a whole year practicing yoga in a hot room, at the same temperature as does in Bikram. “

“What attracted me to the practice of hot yoga was the challenge, both physically and mentally,” he continues. Amanda explains that in hot rooms there is an active process of heat loss, which stimulates and purifies.

“The hot body produces sweat to cool it and at the same time increases the heart rate to regulate the temperature. The heat also drives the metabolic process mobilizing toxins to eliminate them.

Rapid heating of the body is noticeable in more relaxed and elastic muscles, making the movement is more fluid. “

As for the mental challenge, Amanda says that it is conditioned by the high temperature. “I remember struggling at first to resist the urge to dry myself continuously. It’s important to keep the focus on yoga breathing and movements.”

When asked about benefits and disadvantages, the yoga and mindfulness teacher points out: “The feeling after practice is really well-being, since it promotes relaxation, and you sleep really well; it is also very helpful for people with respiratory difficulties It helps to open and strengthen the respiratory system.

Summarizing – The How Many Calories Does Hot Yoga Burn

A yoga class at more than 100 degrees Fahrenheit is equivalent to running more than 6 miles, according to expert opinions.

You can also lose between 500 and 1,200 calories, depending on the body. Attending classes in these rooms equipped with high temperatures and considerable humidity, can then:

People who like hot yoga say they feel better after doing it, although the benefits they report vary among people, who have different motivations for taking classes.

Some have reported negative effects such as nausea, dizziness, and dehydration, but those symptoms are generally mild. Now You know How Many Calories Does Hot Yoga Burn.