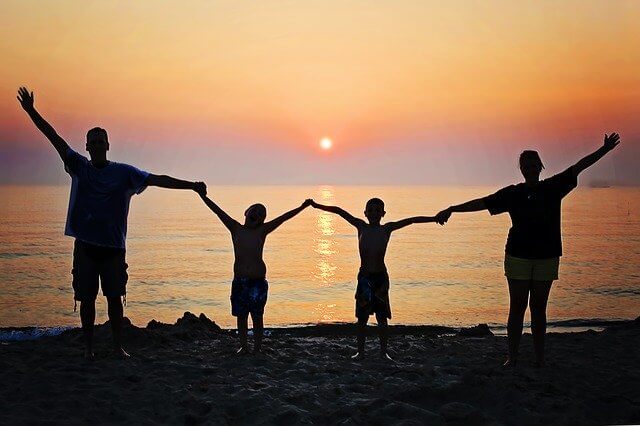 Yoga is one of the best exercises that you could do to keep your body and mind perfect. It is a great exercise that has many benefits and one can get their life changed if they take yoga seriously. Many people imagine yoga as a serious art where one has to be strict and discipline. There is no place for fun and if they don’t do all these things correctly, then they won’t receive the benefits of yoga and thus they would be unable to get rid of all the problems in their body. This is true to a certain extent. While one part is true, the other one is false. The truth is that if you don’t do yoga seriously, you won’t receive the benefits of yoga. However, the false part is that you don’t need to be serious while doing yoga. There is no need to do yoga alone and one does not need to be serious if they want to do yoga. The truth is that yoga can be done in a playful mood and one can get all of its benefits still. This type of yoga is practiced all over the world and it is called family yoga.

What is family yoga

Is practiced in the family where the whole family gets together and they do yoga in their own time. It can help to get rid of all the problem and it is as effective as normal yoga. Can have a great impact on the mental health of the person and it is one of the few forms of yoga that can be done while playing.

There is no need to be serious in this form of yoga and the people who perform family yoga receive all the benefits of the normal yoga. Family yoga has many benefits and it is becoming increasingly popular.

Many people are performing yoga nowadays and they are getting immense benefits from it. Let’s study more about family yoga and how it can help to get rid of all the problems in the body.

What all is included in family yoga?

Family yoga means doing yoga with the family. However, do we need to do yoga by ourselves?

Do we all need to start doing yoga and do nothing else? The answer to that is no. Unlike other yoga which focuses on spending the time to do all the asanas, the yoga is a playful venture in which you can enjoy your time and do all sorts of yoga as well.

People think that family yoga does not have any benefits because it is a fun activity, however, there’s a catch. The catch is that one could get better by having fun. This is the whole concept of the yoga and it can help to get rid of the problem in the body easily. Now let us have a look at the benefits of the yoga.

Family yoga can have many benefits on the physical and mental health of the person. We know this sounds odd enough, however, this is true. Family yoga can be helpful and many people can get benefits from the yoga and we are saying so because it has been proved many times.

People have tried yoga and they have gotten better both mentally and physically since then. Family yoga is underrated however people are beginning to realize it. They are realizing the potential of yoga and so many people are doing family yoga daily. Let us have a look at the potential of the family yoga and how it can good beneficially for the physical and mental health of the body,

People will get rid of the physical problem in their bodies. For example, if the people involved in the family toga are dancing, then it will help to burn the fat in the body and this will help the person to get rid of any weight-related issue. The person can get rid of all the problems in their body with the help of family yoga. Yoga helps to control the cholesterol in the body, it helps to deal with the weight issue.

Family yoga also helps to cure the heart problem and make sure that the heart remains safe and free of any problem. As long as the person id sign some physical activity in family yoga, they will get the positive benefits of the yoga.

The next benefit of family yoga is mental. The mental benefits are the one that is many focused and they are the ones that help the personal life to change. The basic principle of the yoga is to fill the mind of the person with some good thoughts and memory.

The positive emotion that is build up during family yoga helps to fight all kinds of mental problems in the body. It helps to get rid of all the stress, depression, anxiety, etc from the body. Of course, the effect is for a small time, however, if you continue ding family yoga for a long time, then the effect stays for a long time, and eventually, you can get rid of all the negative mental issues in your mind and get better.

Who all can do family yoga?

You can choose your friends or other people with whom you are comfortable if you want to do yoga and you are not eligible. Yoga can be done by anyone who wants to get benefits of yoga while playing and being cheerful. Yoga is much better than other types of yoga and it is gaining popularity slowly.

Many people have opened a yoga center where people of different backgrounds can get together and start practicing yoga. The class is headed by a senior yoga instructor who devises a timetable and tells people what they should do to get the benefits of the yoga. There is various yoga center all over the world and one can get into anyone if they want to receive the benefits of the yoga.

Many people do not believe that yoga can help to cure problems in the body. They think that it is not scientifically possible to get benefits from yoga. However, these people are wrong. Many people have been associated with the yoga and they have told other people on who they got better with the help of yoga. Apart from that, many scientific proofs stell about the benefits of yoga. Scientific studies have claimed about the benefits of yoga and how one person can get all the benefits easily with the help of yoga.